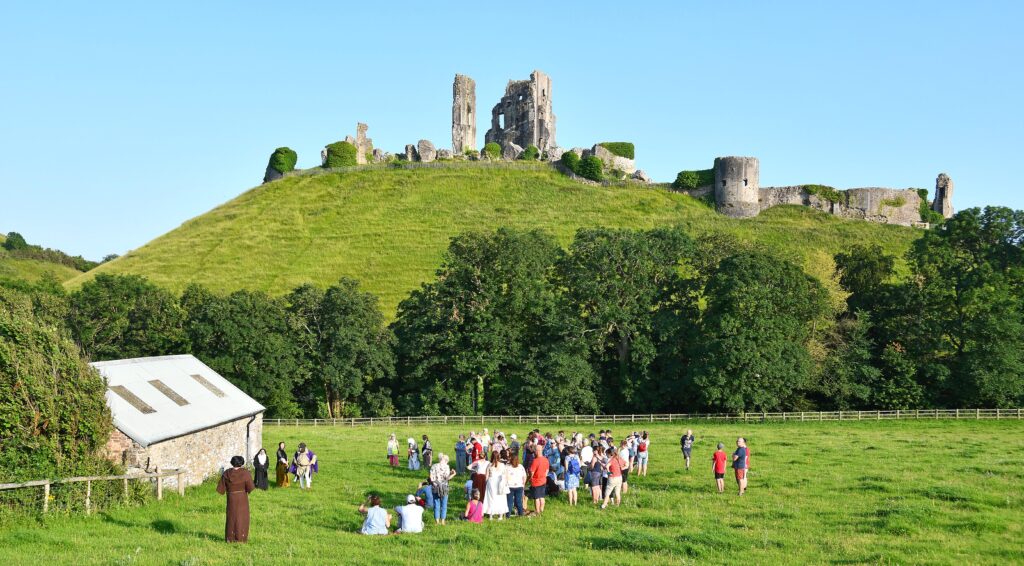 Yes folks, people are coming from afar to witness Double Act’s 2021 marvellous Mystery Walk in the shadow of Corfe Castle!!

Two text messages of appreciation selected at random from the mailbox……

Hi Mike….just wanted to say we really enjoyed the walk yesterday. Really Informative, entertaining and interactive…….with a lovely evening walk thrown in too! Keep up the good work J

We were also secretly reviewed by Scene 1+ (http://sceneoneplus.com/) at our 28th July performance and their glowing report appears below – unedited of course!

It was with great anticipation that I made the journey to Corfe to watch the Double Act drama group perform their Murder Mystery Walk. Not only was this the first review that I had done for quite some time, it was for a type of show that I had never seen, or been a part of, before. The group should be extremely proud of themselves though, not just because it was an inspired idea with the talent to back it up, but also because it must have been a real challenge to pull together with the sheer number of restrictions they would have had to navigate until recently.

The entire performance was presented in nature, with the beautiful, yet formidable, Corfe Castle as a backdrop throughout the walk. Residents of Dorset will be well aware that the Purbeck hills are very hilly and, whilst the walk is a relatively short one, there are a couple of hills to navigate and uneven terrain. The walks were well chaperoned by volunteers and performers.

Unfortunately, there was no programme available and I can’t identify the actors by name. However that didn’t matter because all of the actors had their chance to shine and acted their roles superbly. The core characters of Edgar, William, Constance, Brother Geoffrey and Mab were very entertaining and also very captivating. Their volume was very good, especially given they were performing to a fairly large audience on a very windy evening.

As it is a murder mystery, the audience were encouraged to ask the performers questions whilst we were walking between scenes. Not every actor could cope with this breakdown of the 4th wall, especially with groups of very excitable children asking some very interesting questions, but the group took it all in their stride with some interesting, but generally very guarded answers. What was truly lovely to see was that the audience were fully engaged throughout the performance and all appeared to be enjoying themselves, regardless of their age. There were plenty of questions and laughter throughout. This is a testament to both the actors and the scriptwriter, who had created an interesting, partially historical account, which had some very witty lines. Despite me utilising my best investigative skills, I did not guess the murderer correctly, although not many of the audience did!

This was a very interesting evening which was greatly enjoyed by all, including the actors who you could see were clearly having a great time. If you like a good murder mystery, a lovely walk and to be entertained, I would highly recommend that you take some time to visit the Double Act drama group at one of the three other performances that they have remaining on 3, 11 or 17 August 2021. A brilliant evening guys, thank you.

Some photos from Performance No1, Wednesday July 21st……..

Oh no!! De Redvers has been murdered!!

Who dunnit? The debate continues! 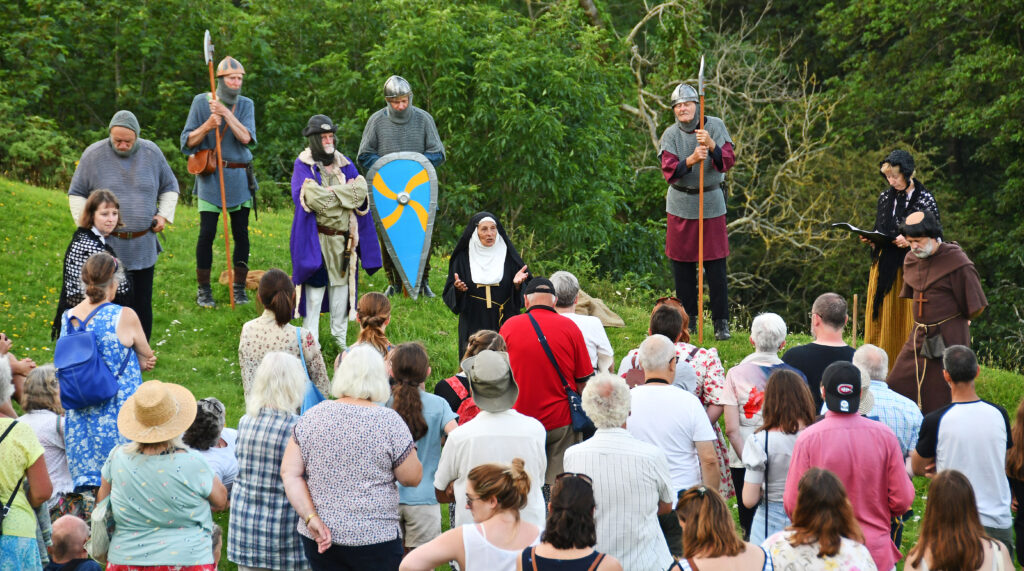 So, who is the guilty party and why did they do it? 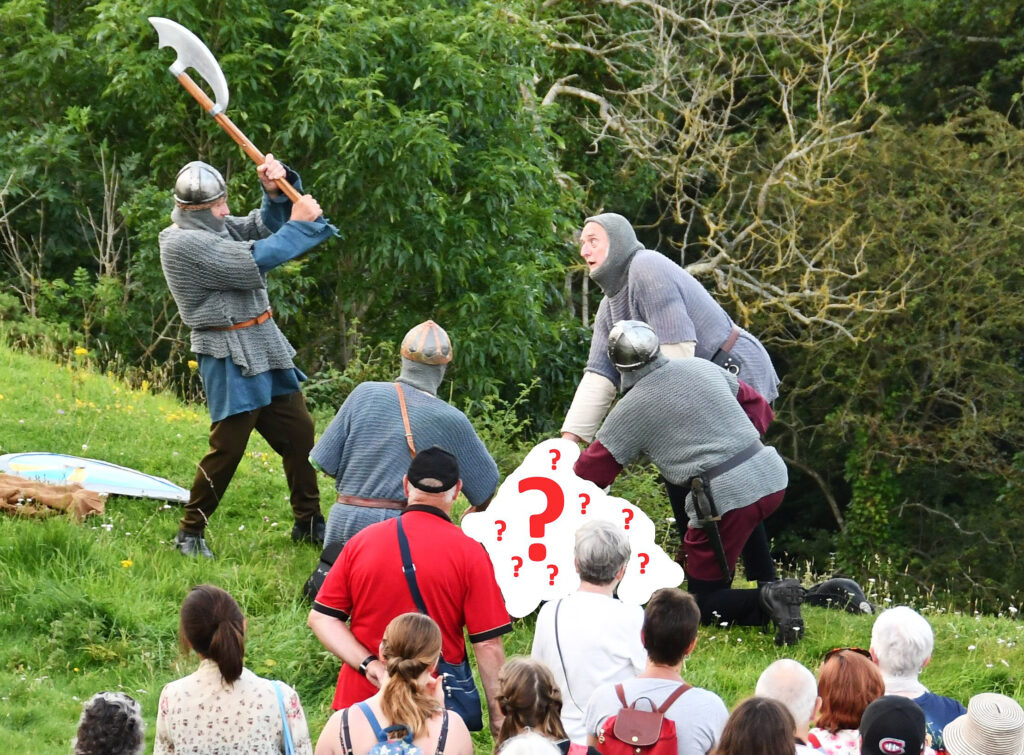 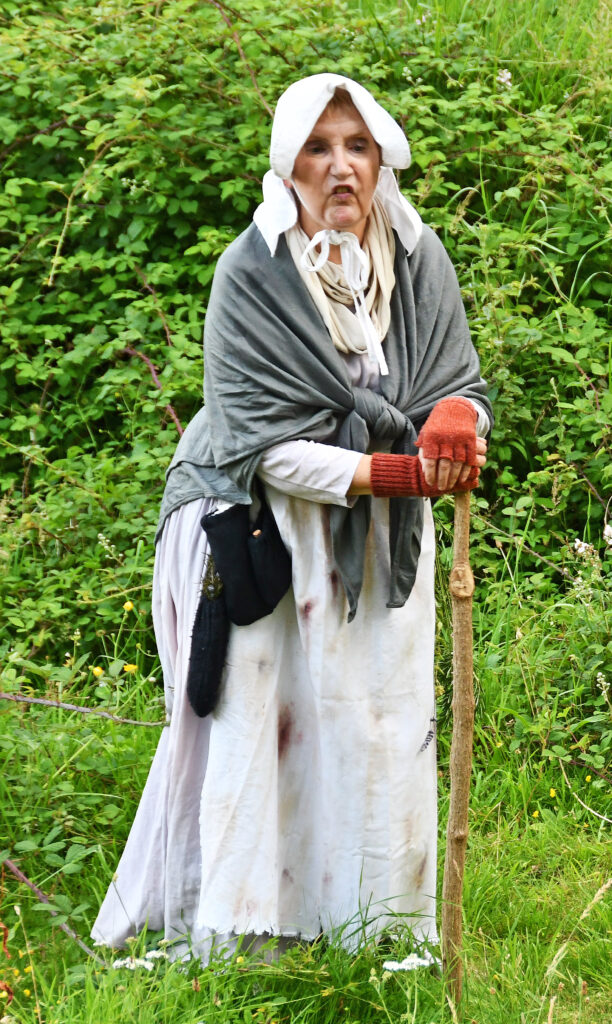 Be careful, Mab sees everything!

Our on-line booking facility will be operational closer to the new performance dates.