The Corfe Castle village hall was home to yet another amazing performance by your very own award winning Double Act drama group. The cast and backstage crew made the most of the fantastic improvements recently made to our beloved village hall to present a most memorable presentation of this classic play – for all the right reasons of course!! 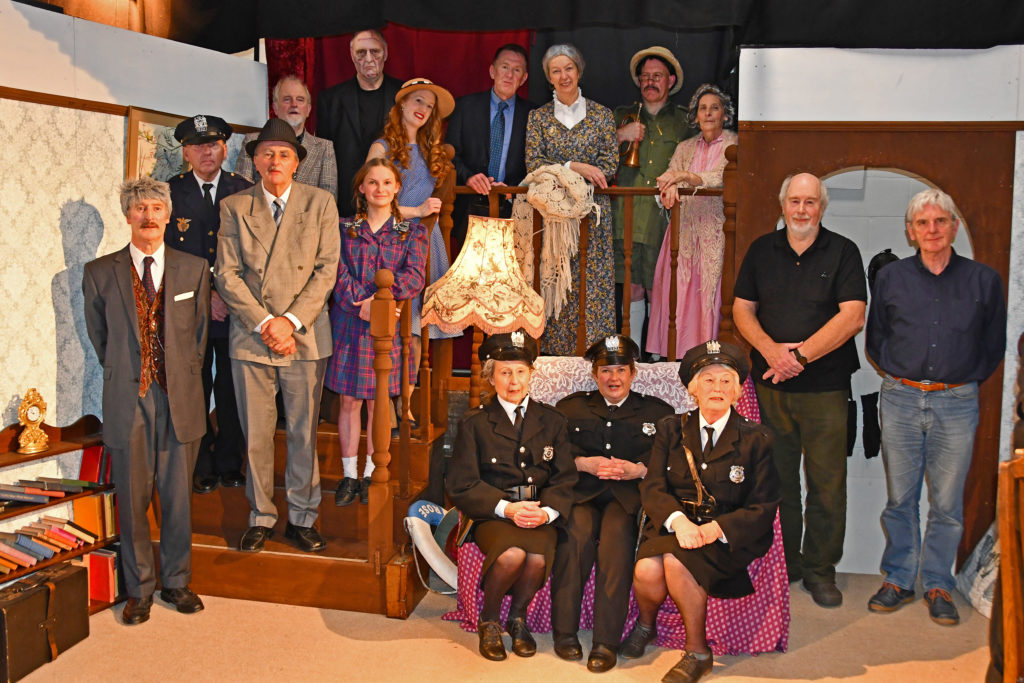 The superb Cast plus a couple of photo-bombing backstage crew members! 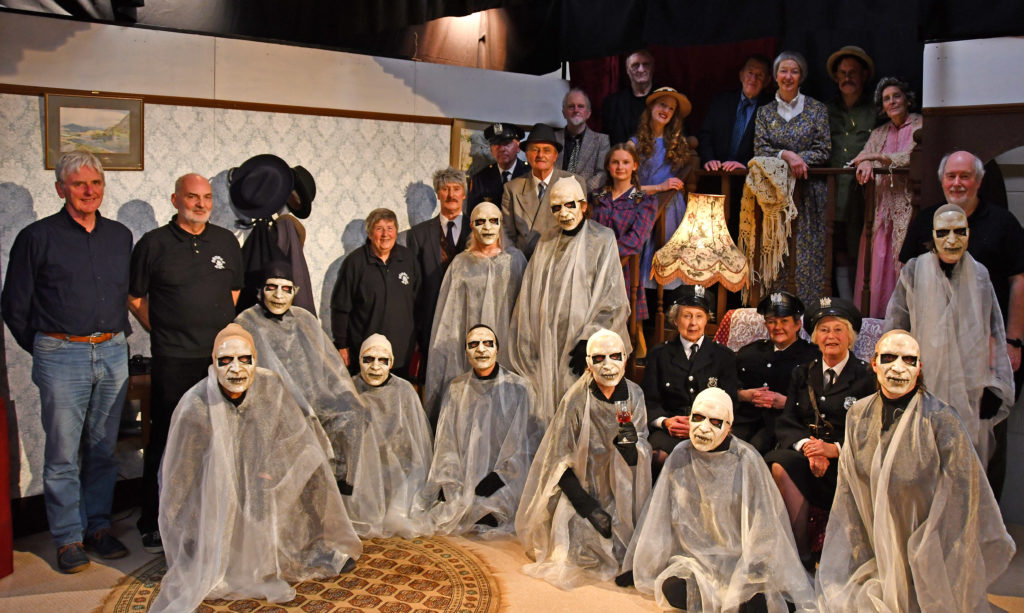 Cast and backstage crew are joined by the ghostly inhabitants of the cellar! 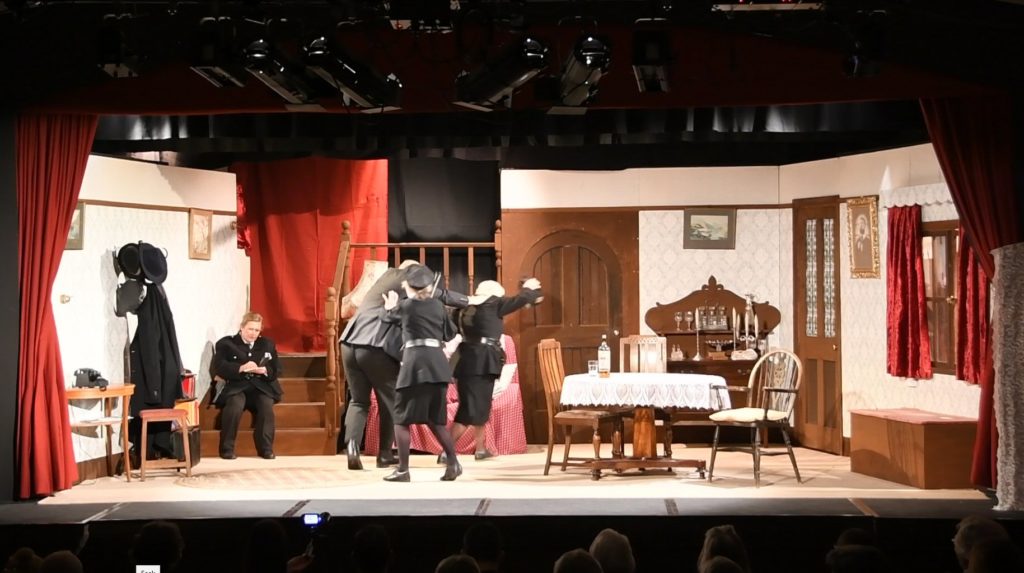 A Saturday attendee kindly provided a review which reflects that evening’s performance, have a read……….

Not for the first time this well regarded local society has come up trumps with it’s latest production, ARSENIC and OLD LACE at the newly refurbished Village hall in Corfe.
A well populated hall on Saturday evening found the audience enjoying a fine performance from the stalwart cast of locals.
If you missed seeing this production it is very much your loss.
Director Christine Kemp is to be congratulated on succeeding so well with her ambitious choice of this classic black comedy. Very much the type of play at which this company excels and in marked contrast to last year’s Autumn offering, which saw multiple production difficulties and a sparsely attended final performance.
No such worries this year. One was immediately impressed with a magnificent set, the very well lit Brewster household living room, with fine detail.
There were numerous fine performances, with several worthy of particular praise. Judith Jenkins was superb throughout as Abby Brewster, giving the best performance I have seen from her. She was very ably supported by her Brewster sister Teresa Neal. Fine casting in these central roles is needed to hold the play together while the comedy swirls around them.
And Rob Schofield as the completely unhinged Teddy Brewster gave an excellent comic performance, also appearing to exhibit his own musical skills on the trumpet.
Although there was no Cary Grant available to play the part of ” brother ” Mortimer Brewster, a fine substitute was found in Michael Peden ( from Swanage ) who went through a range of emotions and mannerisms so well, as seemingly the one totally sane member of the household.
It is not possible to name all those deserving praise, but one must include Peter Smith as the sinister brother Jonathan Brewster and Dougal Dixon as his travelling plastic surgeon Dr. Einstein, master of many a botched operation. Clearly Dougal’s accomplishments are not confined to the literary world. Also Cherry Smith as Elaine and even Hilary Watson as a word perfect member of the rather dim local Brooklyn police force. Plus David Kemp in two parts and young Poppy Lacey in three ( not that two of them required any great acting ability ).
The remaining members of the Brooklyn force all contributed to the mayhem, though it must be said the final detention of Jonathan was not for the squeamish and in other circumstances might well have been considered police brutality and seen at least one officer charged with use of excessive violence.  No matter, we all enjoyed it.
Some good extra touches in this production …… notably the creaking of the sinister window seat whenever it was opened and ( spoiler alert ) the parade of bodies from the basement at the curtain call.
Back stage support was as good as ever with the name of David Watson again cropping up this year.
And it is pleasing to comment that front of house staff were particularly welcoming, with Penny Smith making a special effort this year.
Refreshments were speedily served at the interval and were very good value, though the price of ice creams did double during the evening.
( But only because the initially announced price of £1 each was almost immediately corrected to the correct £2 each!)
Unlike one of Mortimer Brewster’s own theatre reviews this one was written after the performance and is I hope at least a little more positive.
Many thanks to all for a most enjoyable evening. 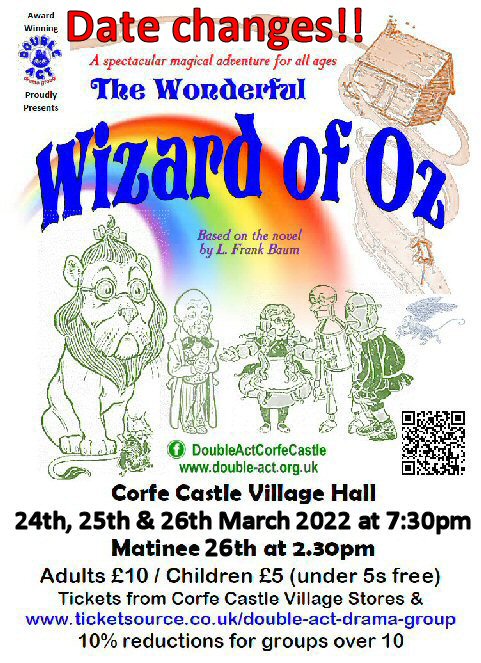